Pressure mounts for Apple: the iPhone 7 sales 25% below the iPhone 6s

Despite the initial euphoria, there were indications offered by the same Apple that would ensure that iPhone 7 will not be the salutary lesson you need. Intuit it before the decision of the firm does not announce sales of 7 iPhone and iPhone 7 Plus during the first weekend, a mythical custom. Now, a report from GfK, the prestigious firm of marked analysis, points that the volume of sales of the new model is 25% below the achieved by 6s iPhone over the same period of last year. The stock market has not taken to react with a drop of up to 2% today, although the most vindictive will be the trend that may acquire henceforth.

IPhone 7 is already among us since September 16. Just a week after his lcommercial anzamiento in a multitude of markets firms analysts start with first reports to shed light on the impact of the new iPhone in the sector. The fact that GfK has been the first to shoot has been a first touch for Apple. And it is that the German company is characterized by the reliability of the information provided.

Prices of iPhone 7 and iPhone 7 Plus which operator it is cheaper?

First investigations and consultations predict 7 iPhone selling not only has slowed, but that goes below records thrown by the level of the 6s iPhone sales during its first week on the market. In proportion, 7 iPhone would have achieved during the same period sell 25% less units than the previous generation. The main reason for this decrease is attributed for months, before even of that knew the model, to the low level of innovation and aesthetic renewal. And it is that despite the improvements made as a double 7 Plus iPhone camera, the water resistant casing or the powerful processor, most of the technical solutions implemented already have been seen in devices from other brands before, thus losing its capacity for innovation. An effect that now weighs on the mark of the bite Apple.

All the news about the iPhone 7

In the absence of new studies that provide us with more specific figures, in Spain, the situation would be similar to that experienced by Apple in the international market. One of the major companies operating in our country suggests that 7 iPhone sales do not respond to the level of the 6s iPhone and they are even further below the role played by the iPhone 6. We could say that Spain reflects the same trend as the international market. He price would be another of the main barriers to the smartphone of Apple not attain overcome just the 8% of share of market in Spain.

The stock market is to listen

After the publication of the report by GfK that echoes of the descent of the 7 iPhone sales, Apple has suffered in the stock market. Immediately, the Park of Wall Street has punished the technological with un up to 2% decline. In economic terms, the value of the title is at this time on the 112.7 dollars against the most today, priced at 114.79 USD and the 114.42 dollars before the opening of the NASDAQ. 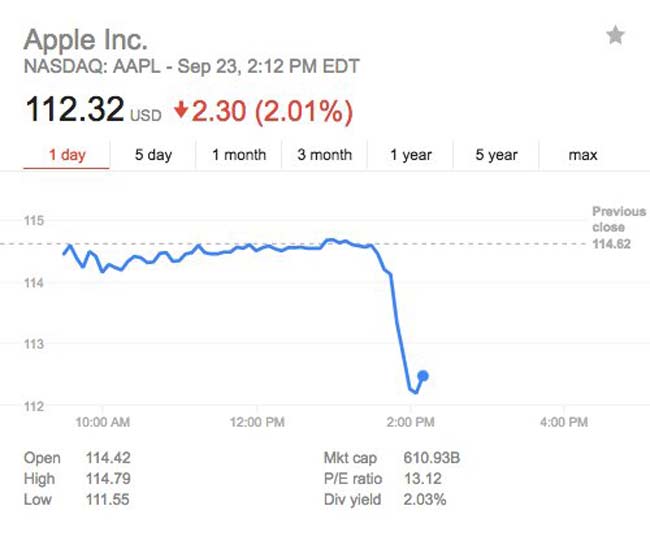 In-depth analysis of the iPhone 7

An impact that may well be a first warning to the Cupertino. However, it will be with the presentation of the accounts of the coming economic quarters when can check to what extent the Apple stock value deteriorates. While the next showing in October not reflected exactly the role of the iPhone 7 – sale started this month, half of the quarter – Yes will so that corresponding to the months of October to December. These results will see accurately the number of units of the iPhone 7 that will be sold, and be below the encrypted by iPhone 6s during the same period – as that seems to behave the market so far, it will be a major setback for the manufacturer.

Apple gets iPhone sales worst since 2014

The article increases the pressure to Apple: iPhone 7 sales 25% below the iPhone 6s was published in MovilZona.

Previous Apple releases iOS 10.0.2 to correct the error detected in the control of the 7 iPhone headphones
Next We consult an expert you need to know about the new terms and conditions of WhatsApp