How to fix memory of Samsung Galaxy J2 Prime problems

The Samsung Galaxy J2 Prime is a mobile stand for sale in November 2016 to open gap within the range low-medium manufacturer. This smartphone comes by default with 6.0 Android Marshmallow, a modern version of Google’s operating system, 1.5 GB of RAM and a 4 core processor at speed of 1.4 GHz.

However, one of the main problems of this device is its internal storage memory, that factory, comes with 8 GB shared among the OS, applications and data from the user. The 8 GB of internal memory, just turn on the device are occupied 4.5 GB by the own Android and applications, leaving only 3.5 GB of storage free to install applications, games, save the hundreds of files that we share through WhatsApp and photographs that we take with this device.

A very common problem after few weeks of use is to see how the device tells us that we are running out of free storage space or, when you try to install an application, see how the Play Store returns us a numerical error synonymous with lack of free space.

In addition to a basic maintenance by the user (copy your pictures to the computer, clean WhatsApp often, uninstall applications that we do not need or use, etc), it is also possible to end, or at least reduce these problems by installing and setting up a Micro-SD memory card.

When using a card micro-sd on a smartphone, if we are going to use it to install applications, is recommended to be class 10 since, otherwise, we can have problems of speed and performance.

Once we have the card, turn off the device and introduce it together with the SIM card, on the back, on the top of the battery, and turn on the device.

In addition, Android will allow us to move to the SD most (but not all) applications that you have installed. In this way, applications that most occupy can move easily to the memory card to save space in the internal memory. Therefore we simply open our Android settings menu, go to “internal storage > applications” and look you want to to open its properties.

In the section on “storage used” click on “Change” and choose “SD card“. 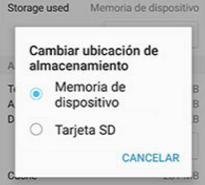 Wait to end the process of move it application and, when finished, can see how the application now occupies space of the card of memory instead of the storage internal.

If we fail to move them manually, we can also resort to applications like which you then link that allow us, in the same way, to move applications installed in the card’s memory to the SD card of your mobile phone.

In this way, by moving the heavier applications to memory card we will save space and we can install more applications in the limited storage space.

The article how troubleshoot memory of Samsung Galaxy J2 Prime was published in MovilZona.