At the same time used two accounts of WhatsApp with 2Accounts

Today, WhatsApp is one of the most used applications globally. Daily they are sent through this platform millions of messages among its users to the point of having become the most important network instant messaging platform. However, WhatsApp has many shortcomings complicated to solve, for example, the impossibility of using two or more accounts for the platform from one device, very requested by users with dual sim smartphones.

By default, WhatsApp only allows the use of a has to the same time and, also, the use of customers modified or not official (as was the case of WhatsApp Plus) tends to be sanctioned by them developers, by what officially is practically impossible use two accounts of WhatsApp different in a same device, at least to the same time, and without risks.

Luckily, there are third party developers willing to meet the needs of the users in this aspect and, on this occasion, have created apps for Android that enable us to duplicate the same application so that we can use two different accounts at the same time, for example, WhatsApp and, Furthermore, with total security, since it does not modify any of the aspects of the official client. One of these applications is 2Accounts.

2Accounts is an application free for Android that us goes to allow create a second instance of an application, completely independent of the main, but keeping its integrity, so can start session with a has different keeping in its State original it application main and with the security of that not have sanctions by this. 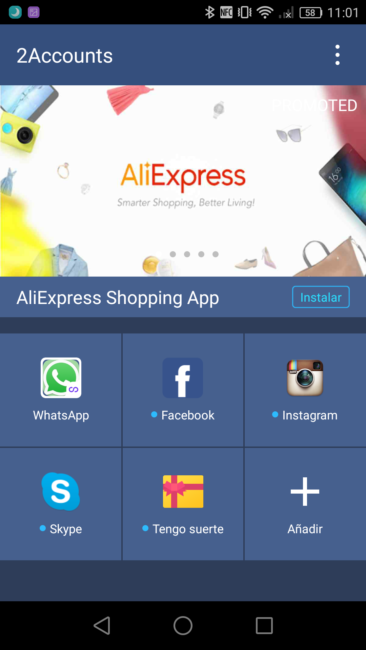 Then, we leave a simple manual in which we explain how we can use 2Accounts for use in a same smartphone two different accounts of WhatsApp.

How to use two accounts with 2Accounts WhatsApp

2Accounts works with any application or game installed on Android, not only with WhatsApp

Even if one uses more interesting of this application is to use two different accounts of WhatsApp on a same smartphone, the application allows us to duplicate virtually any application installed on the device so we have a totally independent of the same instance.

For example, we can use 2Accounts for easily and at the same time two Facebook accounts, Twitter and even play different social games with two accounts different at the same time, and can take advantage of the same benefits that we offer to invite a friend to play.

Do you use other similar applications to duplicate an application and use it with two accounts at the same time?

The article uses two accounts at the same time with 2Accounts WhatsApp was published in MovilZona.