Samsung is not the only major manufacturer that this year will give up its presence in the event of mobile telephony, up to now, most important of the year. Xiaomi, speaking to TechCrunch, it has just said that it will not announce a new device at Mobile World Congress which will be held in just over one month in Barcelona.

The movement is quite unexpected since was supposed to Xiaomi to attend the fair with Xiaomi Mi6, a possible version of the Xiaomi Mi Note 2, under the arm. We cannot fail to remember that the Mobile World Congress, with headquarters in Barcelona, is one of the biggest events for the mobile industry worldwide, attracting more than 100,000 attendees, and has one reputation more than deserved that has made him the ideal place to display large bets on companies for 2017. 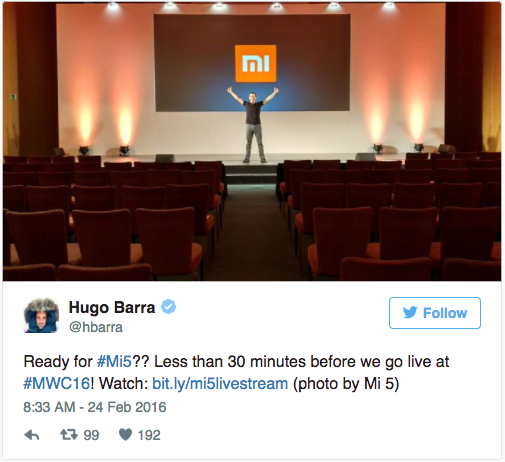 Indeed, Xiaomi used last year’s event to present the Mi5, its latest flagship until the arrival, months later, of the Xiaomi Mi5s, through a press event that was broadcast live on the Internet. Until then, the Chinese brand resigned to attend this type of event, hoping to launch their devices through more focused events to the Eastern public.

Reveal part of the characteristics of the Xiaomi Mi6

This way it seems that, as in the case of the P10 Huawei and Samsung Galaxy S8, we will have to wait a few days to meet the Xiaomi Mi6, another of the terminals more win we have meet in this 2017.

Is Samsung the culprit?

Has been a difficult start for 2017 to Xiaomi. Apart from the exit of Hugo bar by reasons of health, calling curiously in Facebook, the CEO of the firm Lei Jun admitted that the company is entering in a period of transition after grow too fast. Xiaomi, for the first time in its five year history, did not reveal how many smart phones sold last year and seems to want to take things easy in their upcoming releases.

Another reason that leads us to guess by what Xiaomi will not attend the MWC in Barcelona is the shortage of the latest chip from Qualcomm, destined mostly exclusively to meet the needs of the Samsung Galaxy S8. Days ago we already mentioned that LG G6 could dispense with the Snapdragon 835 since chips, developed with Samsung, are not being produced in mass (except for the S8).

Logically, the next vessel logo of the Korean firm riding inside the processor Snapdragon 835, any other smartphone that’s released around the same time with a lower processor would be doomed to failure. Delay also is probably the work of Xiaomi on your CPU of own manufacture, possible solution to the shortage of the Qualcomm processor.

Xiaomi article follows in the footsteps of Samsung and not attend the MWC was published in MovilZona.