Vodafone has released an official statement on their website where alert to all its customers of the sending of email scams with malware on your behalf. This type of email simulate the appearance of the page where any customer can consult the ONO Bill to try to sneak malware into the device from which to open.

The company begins the release indicating that ‘have detected some cases that are being sent malicious emails that impersonate the identity of Vodafone trying to make believe that you it’s an invoice by email’. However this post involves downloading a file that puts at risk the integrity of your PC or smartphone. 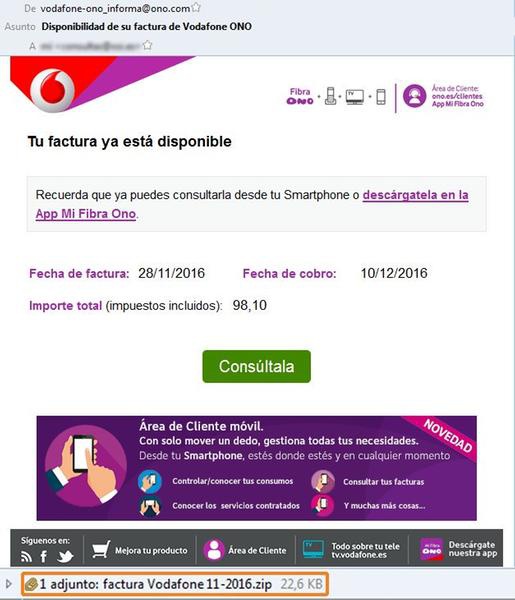 As you can see in the image above these lines and provided by the own Vodafone, the appearance of the email is almost same as the client area of the operator. However, when it comes to see the invoice downloads a Zip file containing malicious content for your PC, Mac or smartphone where is executed.

Vodafone warns that “Although in appearance are equal to the emails that we send to our customers ONO, these e-mails refer do not carry attached files.”

If you are a user of Apple, beware ‘phishing’ attacks seeking to steal your data

Recommendations to a Phishing attack

Suspected to be a victim of a “phishing attack” (computer term called a model of computer abuse characterized by attempting to impersonate the identity of a brand or company) more timely and advisable is to contact the company through different channels at your disposal (mail, social networking, customer service phone) for more information that resolves your doubts.

In this case the company advises customers not to open any email Vodafone carrying associated with an attachment and access Vodafone Forum in case of doubts as to the origin of any email or suspicious content with the name of the company.

If you have received this email and you have downloaded the Zip file. We recommend running as soon as possible the antivirus as well as delete the file without decompression or run it.

Vodafone article alert the sending of email scams with malware on their behalf was published in MovilZona.