Breaking News
Home / News / Try Google Play games without installing them on the phone, even closer

Try Google Play games without installing them on the phone, even closer

This spring we told you that Google was preparing the option to try games before you buy them. How magically we were going to run a game on your mobile phone without having it downloaded or of course purchased before. This option that seems rather of Sci-Fi, if they had told us years ago, begins to be available in some regions where are already offering to test Google Play games without installing them on your mobile. Let’s see how it works, and over all when could reach Spain.

Streaming applications or games is something that is already offered as solution in other platforms, allowing us to play games without installing them. This time Google will not be so radical in its proposal, but that it offers a great alternative to the current system of demonstrations.

Google has announced a series of new features for games of Android that will delight those who do not have too much storage space on their smartphones. The most remarkable of all is that refers to that in a future rather than next Android will allow to try free Google Play games before you install them on your device. Something like a demo online of the game in question…
Continue reading

It is certainly a feature that will completely change the way we interact with the Google store, since as occurs with film or music we will be able to prove the contents before you buy it. Something which on the other hand so far was possible with the games demo versions, but which now takes up to the end, now that Google Play already offered in the United States the possibility of testing a game before you buy it, obviously, but with the peculiarity that does not need to install it on your mobile. 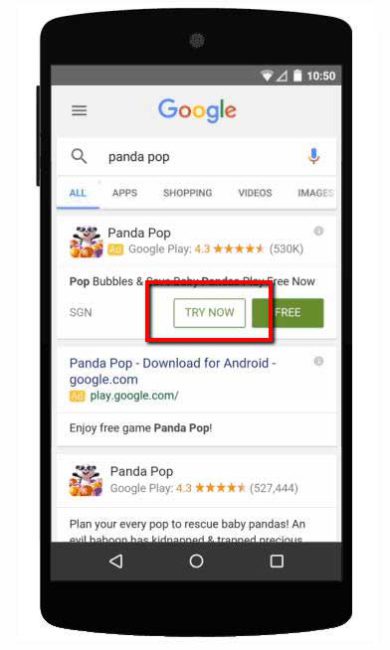 And all this thanks to a virtual process in which we are actually making a game streaming. As it already exists on platforms as PC where already can be played full games on streaming. U.S. users who have started to see this option in your Google Play, have seen how a button “Test” has been added that allows us to play 10 minutes from titles that show this button.

Although already had news about the new service at the beginning of month, has been today when the big G has announced officially Google Play Family Library. As it was already ahead, this new service will allow a maximum of six users share all the purchases made on Google Play, be they applications, video games, books, series or films. More details of the service below…
Continue reading

Basically this streaming sewn in that the game is runs of form remote, while the controls of our mobile are which is sent automatically to the machine virttual, that us returns the footage in time real of the development of the game. At the moment it is beginning to reach some users from United States, and still has not spread to the other regions by various errors which still continues to occur in certain games tests. But it is hoped that in the next few weeks we have this interesting option in our stores in Google.

The article try Google Play games without installing them on the phone, even closer was published in MovilZona.