Breaking News
Home / News / The State of Windows 10: these are the manufacturers more popular

The State of Windows 10: these are the manufacturers more popular

As is the case with Android, every month is a report (in this case drawn up by the Agency adduplex) in which account is given different data related to Windows 10 in many of its facets: manufacturers and most popular versions or the implementation of the system on smartphones are just some of the outstanding categories. We then see what is the current status of the platform according to the data published in September.

Although Windows 10 anniversary version began to be distributed does thing for two months, still many users are still not receiving, and may even touch them wait a bit. The Redmond announced, at least, until the last three months they wouldn’t be to update all supported computers. Anyway this build already has a 1/3 of use within 10 Windows, and presumably, it will continue to progress in the coming months. 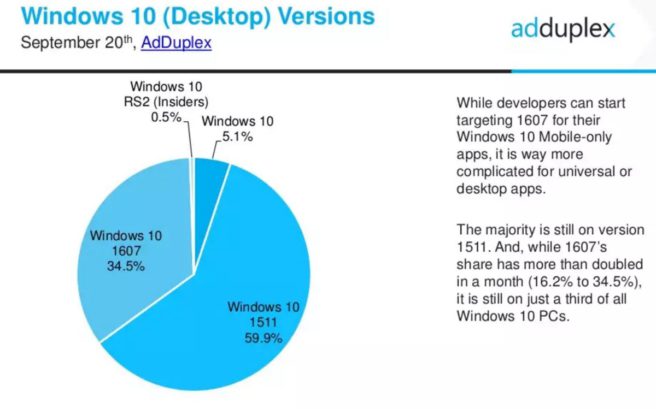 When it comes to looking at the hardware manufacturers keeps more usage share in the segment of the PC / notebook / Tablet (and not only counting Windows 10, also previous versions) are headlining the list at HP, which adds a 22% of users; While Dell and Lenovo are behind (11.4 and 12.2 respectively). Microsoft, for its part, gives a measure of the presence of the tablets on the platform since it only has the Surface within your catalog. 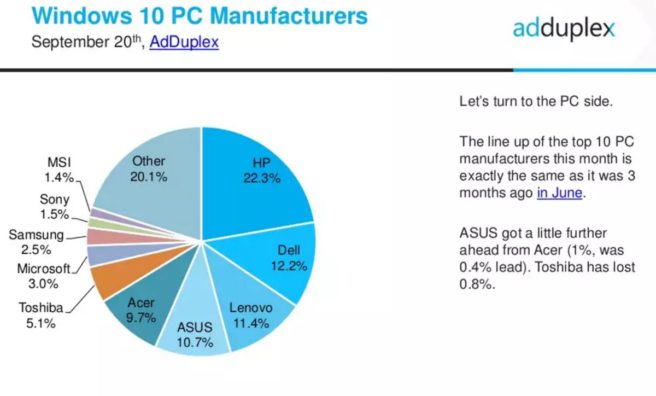 Interestingly, on the other hand, is to appear a notorious Other (20%) that surely has significant importance a good number of tablets of modest marks, since all other manufacturers (Acer, Samsung, Asus, etc.) relevant appear already in the graph.

The section of mobile, free fall

On the other hand, it continues confirming that Windows 10 Mobile is virtually desert territory, only with a 14% adoption, but no new terminals that pushed the platform forward except the Elite HP 3 X, very exclusive. A Surface Phone hopes are fading with the passage of time and the Lumia have not achieved an impact commensurate with the quality of the product. Remains to be seen if those of Redmond are trying or dedicated simply to develop the services pro for Android and iOS.

10 Windows anniversary: why does not update my tablet (or PC) and how can I force it

In any case, that section is a clear contrast with the opportunities that are opened in the segment of the hybrid tablets and 2 in 1. If Microsoft gets that developers of Android and iOS usual focus on its universal platform, the battle can be beautiful.

The information in adduplex.
via windowscentral.com

The article the State of Windows 10: these are the manufacturers more popular is published in TabletZona.

2016-09-23
TA
Share
Previous Google Allo and Duo could merge soon with an update
Next Apple releases iOS 10.0.2 to correct the error detected in the control of the 7 iPhone headphones