The price and all the features of Meizu M5S seep

The Meizu M5S is one of the next mobile Chinese who we should meet formally this first month of the year. Smartphone MEizu has planned its presentation next January 27, i.e., this same Friday, for which the company has already sent invitations to the media event. 48 hours before his coming-out has been leaked possible price and all the features of Meizu M5S.

Today same leaked document emerged in the network seems to confirm all the previous specifications that we knew from the terminal and the existence of different variants of the Meizu M5S appearing already by Tena certification earlier this month. In addition, the retail price of the phone in the Chinese market has also would have found.

According to the leaked document, the Meizu M5S will cost 999 Yuan, which would result in about 140 euros for the base model with 2 GB of RAM and 16 GB of internal storage. At the moment have no more clues as to the price of the other variants of the phone could be sold with more RAM and a larger storage.

Characteristics of the Meizu M5S

The Meizu M5S was seen earlier this month was on the web site of GeekBench benchmarking. Prior to that, the device was detected on the web site of the Chinese agency certification, Tena. Interestingly, the device was detected in Tena with two different model numbers – M612Q and M612M, but both show a similar set of specifications that would have now confirmed with the filtering produced few hours ago. 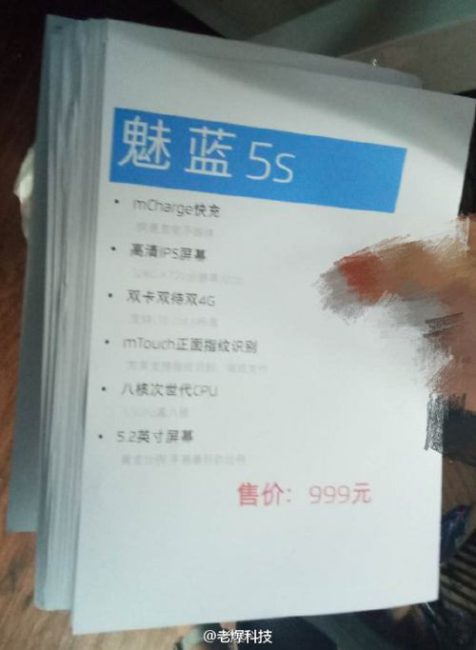 Internal storage in all variants can be extended up to 128 GB via a microSD card and everyone would have a battery of 2.930 mAh as well as Android 6.0.1 Marshmallow as operating system. The terminal is completed with a rear Chamber of 13 megapixel camera with LED flash and a 5 megapixel camera located on the front sensor.

The Meizu M5S 3 models will be marketed in silver, grey, gold, as well as the classic rose gold.

The article leaked the price and all the features of the M5S Meizu was published in MovilZona.

Previous Could Donald Trump policies increasing the price of the iPhone 8?
Next K6 vibe Note: Lenovo returns to the mid-range through this phablet