The OnePlus 3T AnTuTu and Geekbench results are false

A few years ago it was discovered that some mobile phone manufacturers increased the frequency of the CPU when it was detected using benchmark as AnTuTu applications. In fact, the signature launched an application specific to this type of smartphones. Now from XDA Developers denounce the OnePlus 3T in AnTuTu and Geekbench results, like those of the Meizu Pro 6, are totally false.

From the famous Forum of developers is warning that OnePlus not has waived to these old tricks when is is of working with applications of reference to affect the result of the performance of the phone. The site advises that trying to understand how Qualcomm gets faster opening speeds in the Snapdragon 821, was discovered a strange behavior with the 3T OnePlus which did not appear in other phones powered by the same processor.

“Our editor in Chief, Mario Serrafero, was using Qualcomm Trepn and Snapdragon Performance Visualizer to monitor how Qualcomm CPU clock speed” increases”to open applications, and noticed that certain applications on the 3T OnePlus not reverting to its normal state after its execution”.

This began to feed the suspicions of that them results of the OnePlus 3T enAnTuTu or Geekbench could be altered, since is thinks that OnePlus could do work to the phone of form “special” before the different applications of benchmarking present in Google Play Store. Therefore, both Geekbench and XDA were associated to determine once and for all if OnePlus was manipulating the results of test. The answer is Yes, is doing.

Mobile with the best relation price-performance in AnTuTu of November

After the suspicions came her confirmation. The 3T OnePlus increased the CPU frequency when working with this type of applications, resulting in an artificial score originated not by the workload of the CPU, but by the package name of the application, that the hidden compilation may mislead.

The worst is that OnePlus is not the only manufacturer that has been discovered in the last hours that follow this strategy to trick users, and to own banks of tests for measuring the performance of a terminal. While the report focuses mainly on the 3T OnePlus and their “Wiles, also reported that Meizu performs a similar process benchmarking applications with the Meizu Pro 6.”

After know is the situation from XDA Developers is has contacted with OnePlus to know its posture before these results false of the OnePlus 3T in AnTuTu. The company does not deny that the processor frequency will increase when you run different applications, but ensure that this function is present in OxygenOS, the operating system based on OnePlus Android to help the games and other high performance applications to work better on their phones.

“In order to give users a better user experience in applications and games with great demand for resources, especially in the graphic aspect, we have implemented certain mechanisms in the community to enable the processor and run more aggressively. This process will not be present in future compilations of OxygenOS for the OnePlus 3 Y OnePlus 3T with benchmarking applications.”

These are the most powerful mobile 2016 according to AnTuTu

Taking into account the results of the OnePlus 3T in AnTuTu and manipulation followed by Meizu, Meizu Pro 6, we must question whether 3T OnePlus really deserved to be rated as the most powerful Android phone last year according to the references of the Bank of tests, with an average rating above 163,000 points. 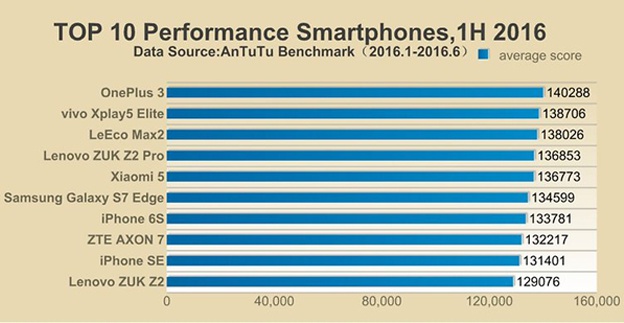 The article the OnePlus 3T AnTuTu and Geekbench results are false is published at MovilZona.

Previous Samsung moves the presentation of the Galaxy Tab S3 in their invitations to the MWC
Next Unveiled the features and price of the Huawei P10, Huwei P10 Plus and Huawei P10 Lite