The Sony Xperia XA Ultra is the bet of the Japanese firm within the larger phablet to provide a terminal of mid-range with an excellent camera. This segment is increasingly populated, with terminals as my Xiaomi Max 6.4 inches or Galaxy J Max no less than 7 inches. Today we echo of a battery test that will test the “low” ability that count, only 2700mAh, when some of its rivals, such as the Xiaomi or Galaxy A9, they boast a more 4000mah, see to view the results.

It is increasingly more common to see terminals with a battery of 4000mAh-at least in the middle range, and some like my Max with a huge display of 6.4 inches and a larger market battery. In this case the Sony Xperia XA Ultra will test a battery that a priori, and for a phone of this size, it should be a little short.

According to this test, the Sony Xperia XA Ultra is measured to other mobiles with similar features in many cases, and although it does not disappoint, not noted especially in any section. As for talk time gets a good mark, which does not highlight or at the top or in the low, 14 hours and 22 minutes of conversation with a load. It is a very similar to Huawei P9 or Meizu Pro 6-brand. 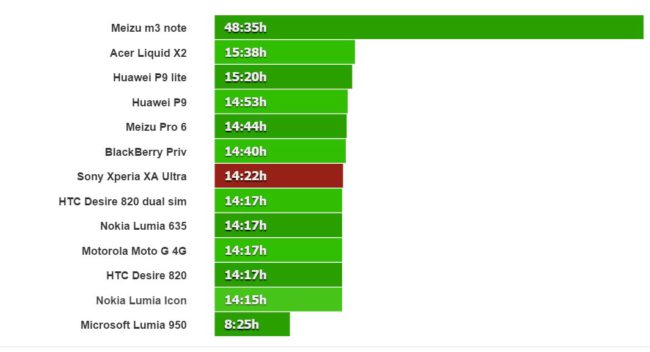 As for web browsing, is away from some rivals, like for example the Samsung Galaxy A9, which has a full-size, six-inch AMOLED display and manages to stay on while you browse the web for 13 hours and 26 minutes, while the Sony Xperia XA Ultra manage to do it for 7 hours and 50 minutes, without a doubt a very discreet result taking into account that they are direct rivals.

In the reproduction of video the result returns to be very discreet, because the Sony Xperia XA Ultra is keeps playing video during 7 hours and 59 minutes, while a time more the Samsung Galaxy A9 gets overcome it loosely with nothing less that 18 hours and 36 minutes of reproduction, by which almost triples its autonomy. 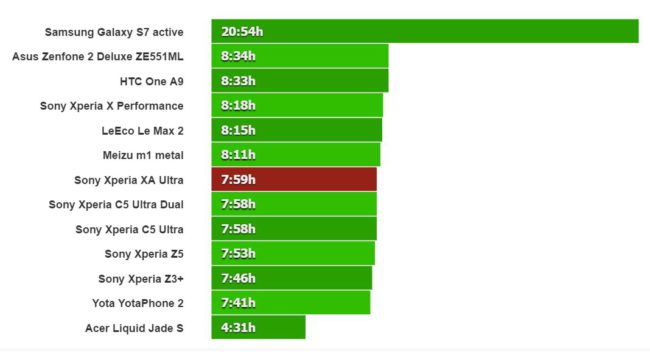 It is something that was expected, for a terminal 6 inch only has a battery of 2700mAh, against an average of 4000mAh in its main competitors.