Reveal the true identity of Nokia Pixel with Android Nougat

After having confirmed on various occasions, it is not any secret that Nokia will return to the market of smartphones in the next 2017. In fact it is expected to introduce its first terminals without the burden of Microsoft in the MWC in Barcelona next month of February. One of the handsets with more basic specifications that we had seen running was Nokia Pixel with Android Nougat and that he had made us doubt whether the brand was focusing on a very low range, which has now discovered is all the truth behind it.

Nokia is preparing his return, and in this process have been leaked several terminals, mainly one aimed at the high-end, known as Nokia P1, and another for the more affordable mid-range D1C Nokia. Well, a third terminal Nokia Pixel with Android Nougat that we had seen through the test of performance with ultra modest specifications, has removed the mask and discovered his true identity.

New images of the Nokia D1C with Android 7.0 Nougat

It is not Nokia Pixel with Android Nougat, it is a Nokia X 2

It seems that it has occurred with the passage by Geekbench de el Nokia Pixel in the middle of this month of November, is that who has uploaded the test basically had changed the original name of the terminal to make it go through the Nokia Pixel with Android Nougat. A name that had chirriado us from the beginning, and more with some as basic specifications as the ones presented. A terminal with 200 Snapdragon processor and 1GB RAM did not seem the best letter of introduction for the return of Nokia to the market, and at the end it was discovered the truth. 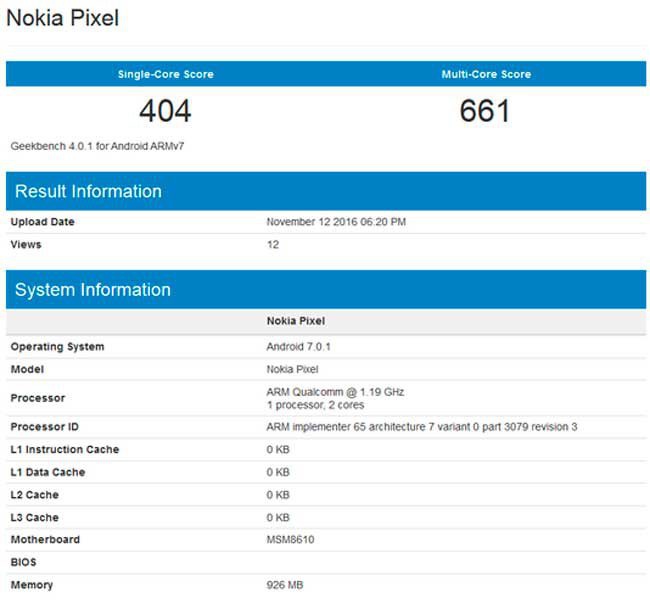 As you can see in the attached images, the Nokia Ara passed the performance test last October with the same features as the Nokia Pixel exactly, except for the software, which on this occasion was 5.1.1 Android Lollipop. As well, who climbed the results to the Geekbench came up with the rename per Nokia Pixel and pass the results obtained with a cooked ROM of Android 7.0.1 Nougat to make us think that we were at a new terminal of the firm’s face on his return.

And besides there is no significant changes in the performance of the terminal with Nougat, this information helps us to terminate the existence of Nokia Pixel, more than anything because is simply the Nokia X 2 presented the past 2014 with specifications that already were very modest. So at the moment we are still awaiting the D1C Nokia and Nokia P1 for the big return of the signature in just three months.

The article reveals the true identity of the Nokia Pixel with Android Nougat was published in MovilZona.

2016-11-27
TA
Share
Previous It releases the bootloader, install a recovery and get root to the Motorola Moto G4
Next ROM update: Dirty Cow is not solved, TIZEN, OxygenOS Open Beta 7 and more