One of the best Chinese manufacturers currently Meizu. We have seen that for years, it has begun to use more powerful processors and give a light touch in the design of the mobile so that they are in the high range, but today, the 7 Pro Meizu, is which is filtered.

Last year, we saw as Meizu gambled on the high end with the Meizu Pro 6 Plus. This phone was the best that the Chinese company had manufactured so far. He left bet on MediaTek, as it had done throughout the year, to begin to bet on really high-end processor.

The Meizu Pro 7 bet by Qualcomm

We have enough time seeing as Meizu changes every little processors. Meizu policy was bet on MediaTek processor in its mid-range and low-end, and once a year, took out a terminal of high-end processor from Samsung, an Exynos. Meizu has pursued this strategy for years, but last year surprised since it was not until the end of the year when pulled out the Meizu Pro 6 Plus, the high-end of the Chinese firm. 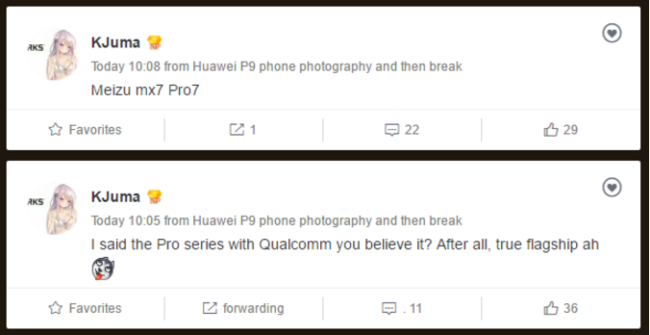 . Last year, at the beginning of year, Meizu pulled Pro 6, a mobile phone that did not come to highlight in its range, but the news that reaches us today is that, his successor, will begin to bet on Qualcomm. As we can see in the image filtering, Pro, i.e. the Meizu Pro 7, series will begin to use the processor Qualcomm Snapdragon 835, while Meizu MX7 surely carry a MediaTek processor.

We don’t have more details about this filtering. It is assumed would arrive in the first half of the year, since it is the date to which we have used Meizu, Meizu MX7 while el Meizu Pro 7 does not believe that it will come until the second half.

This assumption thought it by the news that reached us the other day that LG will not use the 835 Snapdragon in the G6, as that Samsung will be the first batch of processors and other manufacturers will have to wait for Qualcomm to manufacture more processors. We will see what such Meizu makes it this year and if you can make a really differential design in the high range.