Galaxy Tab S3: appears a variant with Snapdragon 820 in benchmarks

Information about the next Galaxy Tab S3 anticipating its release in a matter of weeks continues to arrive. Today they have begun to circulate the Web a test of GFXBench in which it is possible to read most of your technical specifications. Certainly after rumors of yesterday, the big news is that the device will run (at least in one of its versions) processor Snapdragon 820, getting a yield at the height of the times.

Yesterday leaked what appeared to the characteristics of the Galaxy Tab S3, 7420 Exynos, the same as the Galaxy S6-processor, at the controls. We mentioned that a SoC was a couple of years old, so the news conveyed not us too optimistic about the team. While it is a powerful chip, there is a huge difference with respect to the 2016 generation and more there will be now when the Snapdragon 835 begins to be distributed.

The test of GFXBench leave us a device with enough outstanding characteristics, at the height of what you can expect from a high-end tablet in 2017. The Super AMOLED screen will keep format and resolution, with 9.7 inches and 2048 x 1536 pixels, while the processor, as we say, will be a Snapdragon 820, quad-core, 2.1 GHz, with a GPU to Adreno 530. 4GB of RAM, 32 of internal storage and Android 7 are other data that will reveal. 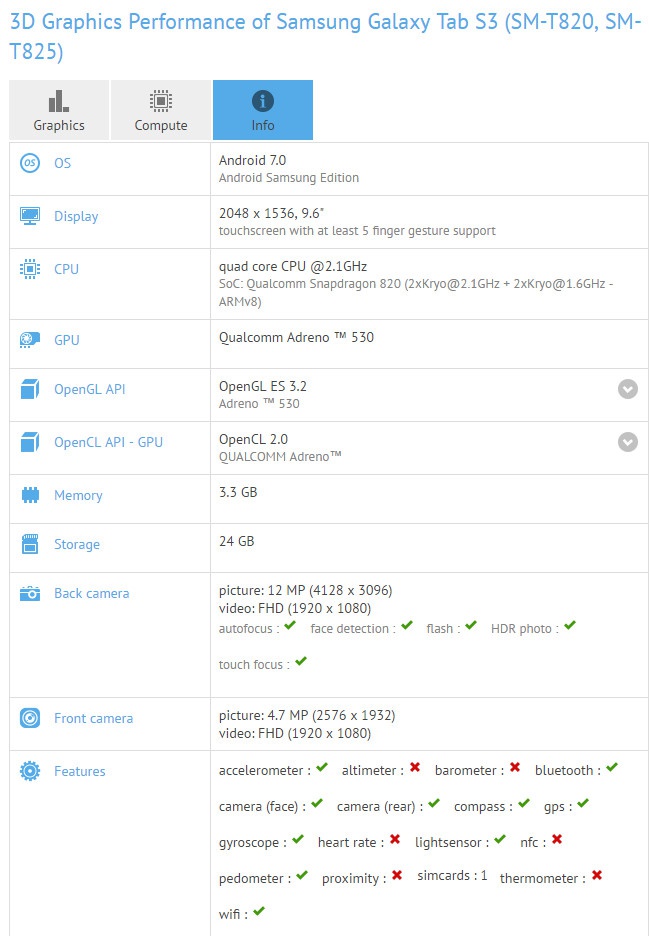 Although it is true that the Snapdragon 820 is not going to get the performance of a 835, however, the provisions of this chip are walking very fair in the coming months and is even doubted that flagships as LG G6 can even mount it, since the Galaxy S8 is the priority at the moment for Qualcomm.

Is it possible to see two variants of the tablet from Samsung?

Not discard in absolute that the company Korean prepare two versions of its Galaxy Tab S3, a with processor Snapdragon 820 and another with Exynos 7420, as already has happened in other occasions. We assume that, if so, the first one will be used for markets such as the European or American, and the second Asian.

Know that Samsung plans to launch its Galaxy Tab S3 in this first quarter of the year. Indeed, the device is no longer different registers in different bodies of certifications, so arrival basically depends on the way in which the Korean company decides to play times. With the market of Android tablets in decline, this model, which other years had been representative of high-end, arrive between some doubts. …
Continue reading

Anyway, the difference in yield between these processors is bulky (of less than 70,000 points to more than 140,000 in AnTuTu), by the option Exynos deserves some caution for now.

The article Galaxy Tab S3: appears a variant with Snapdragon 820 in benchmarks was published in TabletZona.

2017-01-25
TA
Share
Previous How to have full coverage on your mobile phone at your home
Next HTC U Ultra vs Pixel XL: comparative