Prism added at the beginning of this month to its application for iOS the possibility of live broadcast with the famous style of the app through Facebook Live earlier this month. However today we learned from Facebook to grain filters of Prisma on Facebook Live restricting access to its API to the application.

It seems that Facebook not liked nothing the application of photography are worth Facebook Live API to issue videos with famous Prism filters. Is for this reason that it was decided to restrict the access of Prism to the same API.

According to statements from Facebook to Prism: “your application transmits video from a camera for mobile devices, something that already can be done through the official app of Facebook. Facebook Live API is designed to publish live content from other sources, such as professional cameras, drones, etc”. 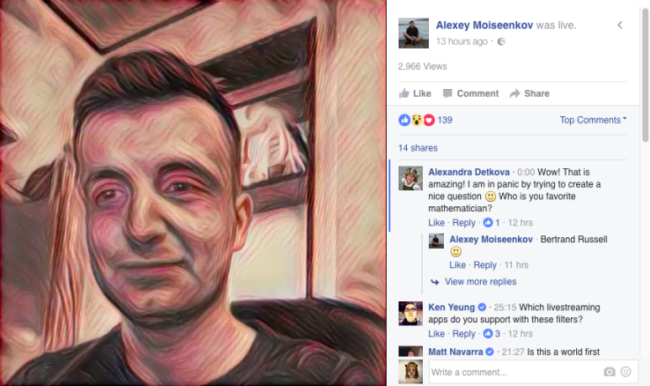 However, in a FAQ which can be found in the Facebook Live website for Facebook developers is not indicated explicitly that the use of cameras of mobile phones is prohibited. It also says that API can be used to apply special effects to any video by what should not, in principle, affect Prism filters.

We already know that Facebook is working on new features for its broadcast platform of “livestreaming” that will allow users to make use of filters that decorate the emissions. Aware of this not is of wonder that this movement of Facebook respect to them filters of Prism is more related with delete to the competition rather than to a possible breach of them rules of use of the API of the service of the network social of video live.

Prism is one of the most successful applications of iOS and Android, reason by which responsible for the social network have cast him eye to your system as it happened with Snapchat and Instagram. At the moment one of the developers of the app’s photo claims to be “trying to solve the problem, but Facebook has a very firm policy in this respect”.

Previous YouTube Gaming lands in Spain as an alternative to Twitch
Next Unleash the Kingdom of dragons on Tap! Tap! Faraway Kingdom