Although we already had with rumors that pointed to this strategy, it has not been until today when we are aware for the first time of the movement. And it is that, as reported from Ireland, the company has begun testing in the mobile application, for both iOS and Android, which consists in moving the tool that gives life to Instagram Stories to Facebook. A replica, but as a native function of the social network, as it allows to see the filtered catch. So is emerging as the imminent arrival of Facebook Stories or stories of Facebook to the official version soon.

Mark Zuckerberg seems to have seen in the success achieved by Instagram Stories, a tool that the company literally copied from Snapchat, the perfect strategy to be replicated on Facebook. And it is that the new format for publications of Instagram –photos and videos that disappear after 24 hours– is already used by an average of 150 million people every day. What placing them within reach of the hand the same tool to more than 1,000 million people who daily use the Facebook app on their mobiles?

Because judging by recent events, will not take too long to check it. And it is that as it transcends from Ireland, has been a Director of the company which has indicated that Facebook has begun to try Instagram stories in the mobile application from the social network, both iOS and Androiod interchangeably. 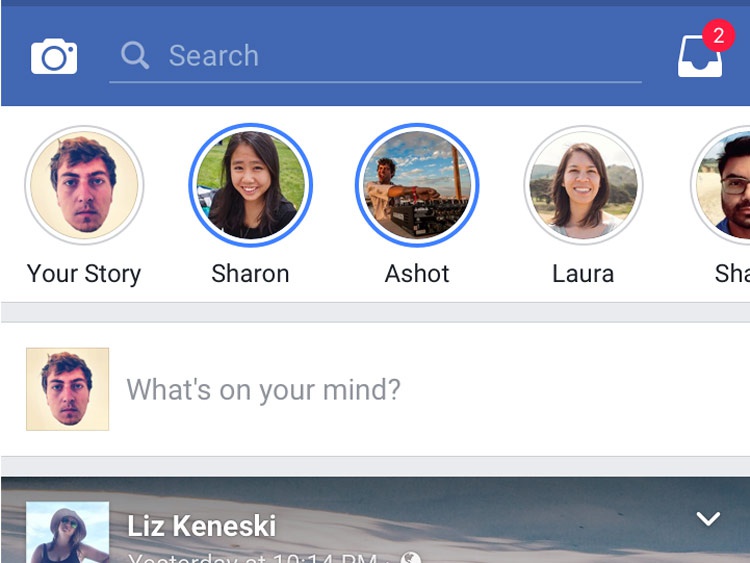 In fact, the news comes with included screenshot that shows how the Stories of Facebook – Facebook Stories- would be integrated into the interface of the mobile application. As already advanced, apparently not is contemplate major differences concerning Instagram Stories since appears the typical carousel with a series of icons that represent the stories published by our contacts. Therefore, there will be no trace tool or publications in the wall of the user.

The dynamics of use of Facebook Stories will be exactly the same as instagram. The user can create their stories from the tool integrated in the camera function the social network app, which you can access through a touch gesture, sliding your finger to the right. In this section we will find filters and editing functions to customize the stories of Facebook.

Important news for Stories with Instagram was last updated

At the moment, Facebook Stories is undergoing tests in Ireland, but the same manager who put in knowledge that function has indicated that the company has planned to extend the tool to other countries soon. Thus, it is assumed that the aim of Zuckerberg is bringing This feature to the rest of the world, there is now no details of when that same happen in Spain.

The article Facebook try a copy of Instagram Stories app for iOS and Android was published in MovilZona.