Apple launches OTA with iOS 9.3.5 to prevent snooping of its iPhones

The last update official released by Apple, iOS 9.3.4, contained a patch of security that subsequently was guessed as antidote to the Jailbreak. Today the update consists in iOS 9.3.5 e also is detailed as a patch of security. A priori, according to information published by the New York Times, the OTA has more importance than might seem since initially that this is the correction of three critical vulnerabilities used by software spy.

At the gates to the release of iOS 10, with their relevant Beta versions in parallel, Apple works on iOS 9. The truth is that the latest updates have been aimed at correcting errors and system optimization. The last iOS 9.3.4, hid a patch to prevent the Jailbreak. Now Apple again to release another OTA, and it makes with iOS 9.3.5. Very likely also lock the Jailbreak to who decided not to update to iOS 9.3.4, but improvements in the new firmware do that owners of iPhones and iPads more seriously measured the passage to the new version given the security measures included in the abovementioned update.

New update of Apple, released with relative speed. A patch of just 30 MB which a priori, as on previous occasions, painted to contain few novelties. Apple is limited to indicate that it is corrections is security. However, iOS 9.3.5 contains, according to the information published by the newspaper New York Times, important security patches. 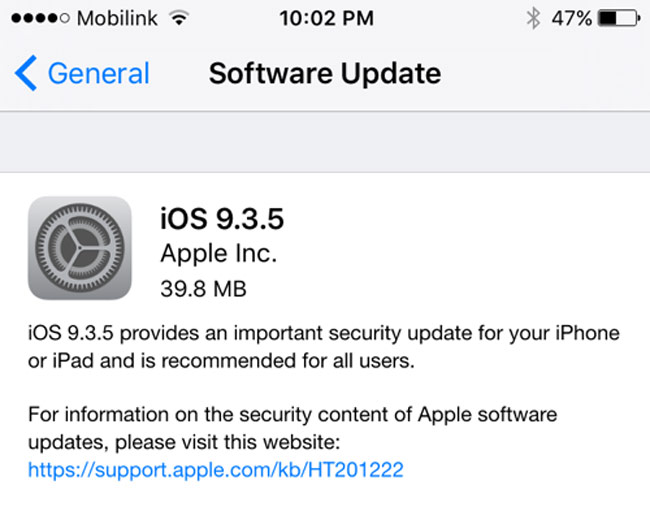 Update to prevent snooping of iPhones

And is that iOS 9.3.5 would be specifically developed to cover three important security holes which resorted to the israeli company NSO through software spy. So it did know makes a pair of weeks three researchers in security computer, which explained that this software is showed invisible for the users of iPhone and, to their backs, achieved read SMS, post electronic, calls e even them beats of the keyboard. A way to spy on an iPhone or iPad running iOS 9 undetected.

They also get to jailbreak to recent iOS 9.3.4

Apple seems to have taken letters in the affair since iOS 9.3.5 has been released mainly to solve them errors of which is nourished the software spyware of this company. Therefore, it seems evident that the update with iOS 9.3.5 is highly recommended.

The article Apple launches OTA with iOS 9.3.5 to prevent snooping of its iPhones was published in MovilZona.

Previous 10 Windows: Five hidden to test on your tablet (or PC) features
Next A study determined that iOS is more errors than Android operating