A study determined that iOS is more errors than Android operating

iOS or Android? The eternal dilemma and main reason for discussion between users. However, a recent study of Blancco Technology Group reveals what rate of errors and what type of errors experienced major smartphones on the market. Highlights from the report is the position that is Apple since that it has been determined that iOS devices have a 58% error rate in tests conducted during the second quarter of the year. In the case of Android, that percentage is at a 35%. We offer the rest of details then.

Since its inception, Apple has been able to boast that its software platform for mobile devices was the most stable. However, according to the latest study by Blancco Technology Group, the figures indicate that the situation not only has varied, but has reversed. Both is so them users of iPhone and iPad have a rate of errors in the operation of iOS superior to it of owners of teams Android. 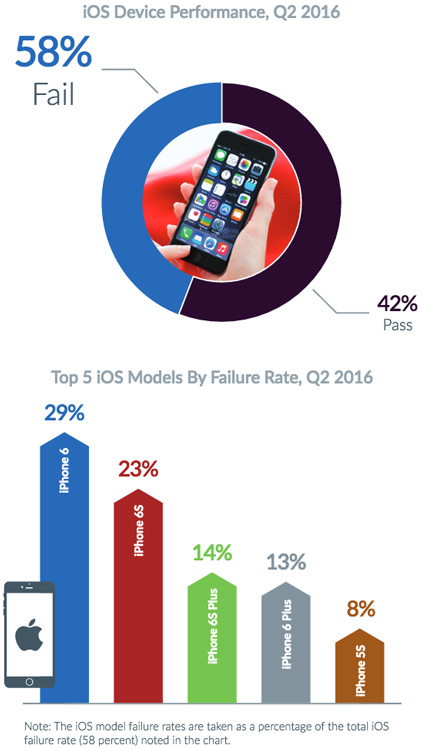 So the quoted company shows it in its analysis for the second quarter of 2016. During those three months be has detected that the iPhone have accumulated a rate of errors of its software of the 58%. This figure represents almost twice the figure recorded in the Studio for the last quarter. In this group several models as the most susceptible are diversified to introduce bugs in iOS. The iPhone 6 is rising to the head with a 29%, followed of the iPhone 6s with a 23% and the iPhone 6s Plus with a 14% of the total of that 58% general.

iOS 10 vs Android 6 Marshmallow where was the innovation of Apple?

In regards to Android, the study determined that the error rate is 35%, which means a slight downgrade from that 44 per cent recorded in the first quarter. By brands, Samsung is that more weight has, with a 26% of the total of the errors reported. Lenovo builds up another 17% and Motorola a 11%. Other brands, distributed the rest is as shown in the graph.

Origin of the failures

As to the reason for the failures detected in iOS and Android, the study indicates that iPhones are more susceptible to errors of WiFi connection, either by not be able to connect or stability problems and disconnections, something that also leads to slow connection speeds. Although to a lesser extent, are presented restarts and failures from of the speaker. However, the apps account for almost 65% of the total number of errors, where Snapchat, Instagram, and Facebook are the main cause with 17%, 14% and 9% respectively.

Why iOS apps have a better reputation than Android apps?

In devices Android, camera, charge the battery, the touch panel and the system reboots are major source of problems. With regard to specific applications from failures is set a 23% rate, where Google Play, service synchronization of contacts and calendar are the most susceptible sections.

The article a study determines that iOS has more errors in their operation that Android was published in MovilZona.

Previous Apple launches OTA with iOS 9.3.5 to prevent snooping of its iPhones
Next Google Maps will include limits of speed and possibility of making orders online